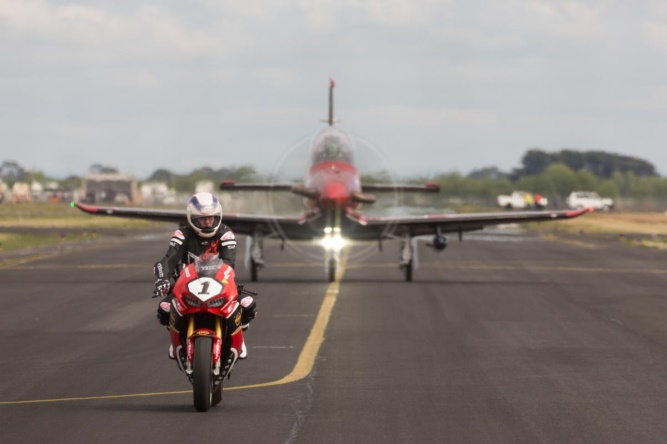 In Gippsland, Victoria, the Royal Australian Air Force (RAAF) got to test one of its newest assets, the Pilatus PC-21, in a race trail with a motorbike ridden by Wayne Gardner.

It sounds a bit like a Top Gear challenge. You know the kind where Jeremy Clarkson challenges his co-hosts, Richard Hammond and James May, to race from…let’s say…Italy to France; them on train and he in a supercar. He’s bound to win. And if you ever watched the long-running show before its infamous ending, you’ll know that, most of the time, Jeremy did indeed win.

At the RAAF East Sale Base, however, the challenge was in the form of a speed comparison race. The first trail had both vehicles at a standing start, which favoured Gardner on the motorbike. But when the PC-21 was allowed a rolling start, Gardner got up to a speed of 600km/h but despite his best efforts, didn’t beat the plane. It’s no surprise. The PC-21 is capable of producing 1600 horsepower and a maximum speed of 685km/h1. The speed trial demonstrated the friendly rivalry as well as the similarities between the RAAF and MotoGP teams, both of whom display technical mastery, teamwork, professional excellence, and safety2.

The Pilatus PC-21 is the world’s most advanced pilot training aircraft and is equipped with a pressurised cockpit, air-conditioning, an anti-G system and on-board oxygen generation. The plane’s digital power management system and automatic yaw compensation makes it easy to fly in the circuit, yet still providing the performance required for advanced training3.

The Air Force’s newest asset holds promise to train our upcoming pilots, ensuring that Australia holds its position as a strong defence nation.

What do you think about the PC-21? Were you there during the speed comparison race? Let us know your thoughts by adding a comment. Or consider joining our Asset Management in Defence Special Interest Group to learn more and experience great networking opportunities.