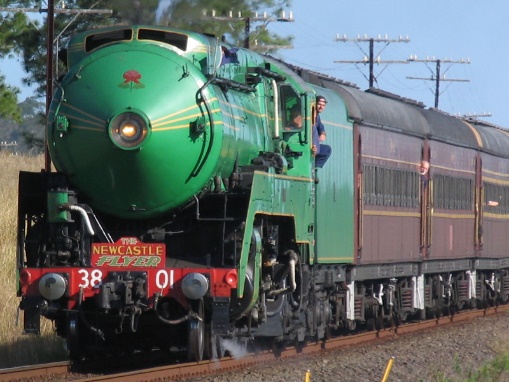 When the world was in the grip of the horror of WWII, Clyde Engineering, based in Sydney, rolled out the first of its C38 steam engine, the 3801.The 38 class were the last coal-fuelled steam engine to be manufactured for NSW fleet of rail stock. From 1943, the 3801 rumbled along rail tracks, the familiar and now-nostalgic trail of steam and smoke chuffing from its chimney, to commute passengers to and from capital cities, and townships in between. Hobart and Darwin were the only capital cities to not greet the 3801. In 1967, the steam engine was decommissioned from active NSW rail service, in favour of diesel engines.

Now, the 3801 is restored to its former glory, including a paint job in Special Green livery and its original boiler, restored in Goulburn in 2016. Its original body has been refurbished.

The 3801 is a wonderful example of a feat of engineering. The 200 tonne engine’s frame is a single cast piece of metal that weighs 40 tonnes. It can hold 36,000 litres of water, with 570 litres being used each mile and one tonne of coal to power the boiler1. The 3801 is fully operational and awaiting relaunch. It can be viewed by the public at the NSW Rail Museum at Thirlmere.

Make sure you’re a member of the Asset Management Council! You’ll receive great member benefits including free access to our vast database of technical papers, reduced rates at our forums and events, free access to fabulous webinars and much more. Learn more about membership rates and benefits by clicking here.