The Asset Management Council was pleased to welcome a group of Asset Management leaders from Queensland and around the world to the AMC Executive breakfast, held at Brisbane’s City Hall on Tuesday 28th March.

The breakfast coincided with the meeting of the ISO/IEC TC 251 Committee, being held in Brisbane during the week. This meeting brought leading asset management professionals together to progress the development of the ISO 55000 suite of standards. Convenors from the TC 251 working groups attended the breakfast, along with asset managers from various Queensland Government agencies and Queensland based corporations.

Peter Kohler spoke to the breakfast about the imperative for asset management to ensure that organisations can deliver what they have committed to deliver. Peter shared from his own experience the importance of capability delivery by recalling his role in engineering for the Royal Australian Navy during the time of the Gulf wars. Peter told the audience that when they were sending a ship into a war zone with 250 of his friends on board, it was no longer esoteric, but an emotional issue. He wanted to feel confident that he had done everything possible to ensure his friends would return safely. This story underlines the real purpose of capability delivery.

Governments and regulators are moving toward the expectation of defensible budgets and plans, which in some cases will include a mandatory requirement for certification to the ISO 55000 standards. Peter related two recent legal cases that have brought these issues to prominence: Ausgrid’s case against its regulator in February 2016, and a class action against Endeavour Energy in June 2016. Peter will discuss these cases in more depth at the AMPEAK conference next week. Peter’s presentation reinforced for the audience the need for real confidence in asset management outcomes.

Rhys Davies, Chairman of the TC 251 committee also spoke at the breakfast. Rhys outlined the journey that standards for asset management have taken through PAS 55 to today’s ISO standards. Rhys emphasised that the purpose of the standards was to provide a common language that allows communication, not only between different functional groups within one organisation, but also between companies in different industries and in different countries.

Across diverse stakeholders, the standards provide aligned objectives, and transparent and consistent decision making that is risk based and made from a position of knowledge. One unique feature of the asset management standards, when compared to standards for other management systems, is that it requires organisations to take a long-term strategic view. Rhys said that he likes to think of it in this way, ‘what would you do with your last $100?’ This question helps to focus on what are the most important long-term priorities.

The uptake of the ISO 55000 suite of standards across the world has been promising. Rhys mentioned that here is now a Mandarin translation that has sold more copies than all the other versions combined. China has a ‘Made in China 2025’ strategy that is helping to generate this interest in capability delivery.

Rhys concluded by sharing that the TC 251 committee has taken an asset management approach to it own work. ‘Our asset is consensus’ said Rhys. ‘This is how we add value.’ We may have achieved a faster technical outcome by consulting only a few specialists, but we have a more effective outcome, by bringing everyone on the journey. 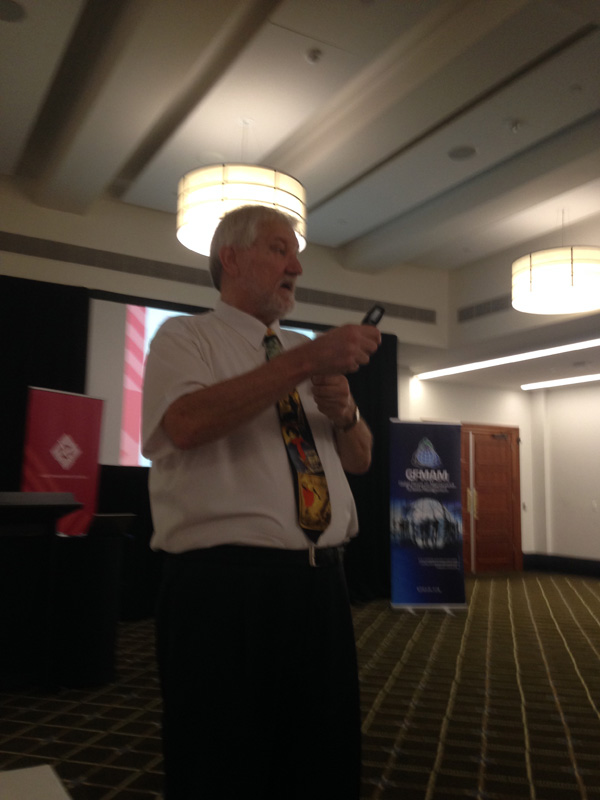