AMCouncil Sydney Chapter was this year invited to assist with the hosting some Field visits (Off-site tours) in conjunction with Engineers Australia’s College of Leadership and Management (CLM) at the Australian Engineering Conference held in Sydney in September.

One of these was at Garden Island Defence Precinct and included a workshop on the topic of Digital Disruption in Construction in the Department of Defence and the other was at the Sydney Opera House.

AMCouncil Sydney deputy chair, Richard Arthur, collaborated with Engineers Australia CLM and Risk Engineering Society (RES) representatives to host a behind the scenes tour of the iconic Sydney Opera House. Almost 50 conference delegates were provided with a tour focusing on the renewal works that have been partially completed. The delegates then heard an address from three keynote speakers:

With a very high economic and cultural contribution to NSW and Australia and a planned life of 200 years for the Opera House – an “Asset Management” approach to managing this asset through its lifecycle is crucial. After the key note addresses, Richard Arthur had the opportunity to briefly outline the purpose and objectives of the Asset Management Council to the attendees. 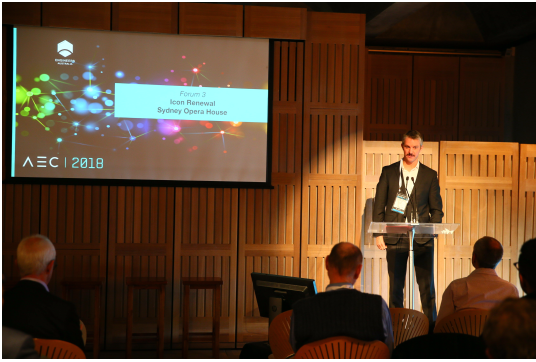 AMCouncil Sydney Chair Steve Doran represented the AMC at the Garden Island tour and workshop which tackled a common and costly issue for which asset management is positioned to solved with a wholistic approach.

Points of interest during the tour were: the dry dock as a critical strategic national asset, the range of architecture reflecting the period of construction during Garden Island’s long history and the sheer scale of support assets (both civil and systems) in place to accommodate the RAN and visiting ships.

The problem statement for the workshop was as follows: Australia invests over $100bn pa in the built environment in buildings and infrastructure, but loses over 15% from wasted effort. Much of this is caused by lost data resulting in uninformed communication, unsatisfactory handover, inadequate project control and end-user dissatisfaction. Lost data is a lost return on investment and can result in a legal compliance mine field which requires that base line data be captured and passed on to supply chain members.

Much of the solution discussion revolved around breaking through the silos associated with the project stages (or asset life cycle) via collaboration and better transfer of information – one of the key benefits of asset management executed well!